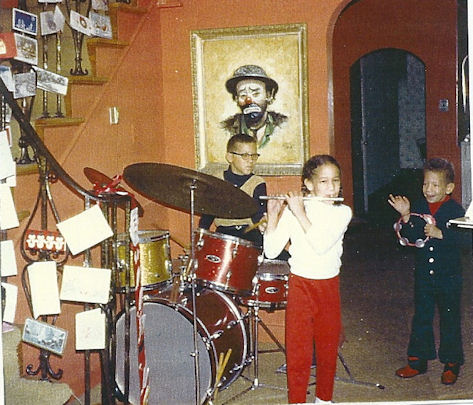 As a boy Gig took piano lessons. But he wanted to play the drums so he asked his parents for drumming lessons instead of piano lessons but they required him to learn piano first. Gig never made it past the piano and says that he still can not read music properly. Gig did play the 2 drum sets that Gig’s brother had in the house until his brother took the main set off to college where he received his Bachelors Degree in Music Education and his Master of Arts in Music Therapy. In his youth, Gig’s brother played the drums on the album soundtrack of a musical theater production of Fiddler on the Roof and on a gospel single record.

The family’s musical talents came from Gig’s mother’s side of the family. His mother was known for being a very good pianist and her brother (Gig’s uncle) went to The Julliard School of Music which is known as the Harvard of music colleges. He attended on a scholarship and was classically trained. He later went on to become known as one of the best upright bass players in the country and recorded on records and albums with different artists. He toured the world with various artists including Melba Moore. And played across the United States in cities such as Las Vegas and Reno, Nevada, Los Angeles, California, Philadelphia, Pa, NYC, NY and Atlantic City and Cherry Hill, New Jersey. He performed with Sammy Davis Jr, Frank Sinatra Jr., Johnny Mathis, Eddie Cole the oldest brother of Nat King Cole, who was a drummer, and even the Ringling Brothers and Barnum and Bailey Circus. Many artists requested that Gig’s uncle play bass for them when they performed at the renowned Latin Casino in Cherry Hill, New Jersey and the hotel casinos in Atlantic City, New Jersey which is where Gig’s uncle currently resides.

In the mid 2000’s Gig went to a music store and slid on a few upright bass strings and said it felt very natural and sounded so good that he could understand why his uncle chose to pursue the upright bass. Gig’s uncle was also good friends with the National Basketball Hall of Fame member Wilt Chamberlain. The two of them grew up together in the same neighborhood in West Philadelphia, Pa and played basketball together as young boys. They were approximately twelve years of age, and played in the Malin Lewis Youth Basketball League, in approximately 1947, on the neighborhood playground. They later reconnected when Gig’s uncle lived in Los Angeles, California and Wilt Chamberlain was living there and playing for the Los Angeles Lakers.

Every member of Gig’s immediate family played an instrument except for Gig’s father who would humorously state that he could play the radio. On Gig’s father side of the family Gig has a first cousin that was a part owner of what Gig believes was the largest and most listened to FM radio station in Washington, DC.

As a boy Gig sang in his church choir and junior high school choir. He says he enjoys singing but knows he is not a true singer because he frequently needs to slide into notes to find them. While a true singer with perfect pitch does not need to search for the correct notes. Gig also sings licks and runs which are styling’s that can be used to try to disguise imperfect pitch. He also likes to use vibrato.

Gig grew up listening to Motown and today says he enjoys many music genres. He was introduced to country music by a friend in 2000 and says it is now one of his favorite genres. He commonly listens to pop, rock, r&b, hip hop, rap, techno, country and Latin. When he was training in boxing he commonly listened to rap which was motivational, and when he took dance lessons in salsa and merengue he routinely listened to Latin music. He is also a fan of jazz and gospel but is quick to say that even though he does like gospel music he does not believe in religion which he believes in a modern invention created by man, after man evolved to a state of awareness and consciousness. But before his understanding of science, and during a time when humans did not even know where the sun went at night. Gig’s beliefs are based on fact and not faith.

“… This is why religions are called faiths, collectively. Because you believe something in the absence of evidence… Otherwise we would call all religions evidence. But we don’t. So I remain unconvinced. But if you’ve got some good evidence, bring it.” – Neil DeGrasse Tyson

Gig’s musical interests are rooted in sounds. Particularly rhythms and beats. He commonly does not hear lyrics and says that the only song he knows all of the lyrics to is Happy Birthday.
Student teachers learn to use daily check-ins and design student family groups that support each other.