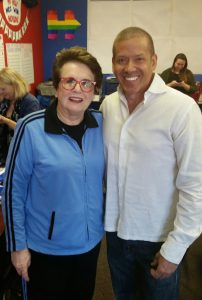 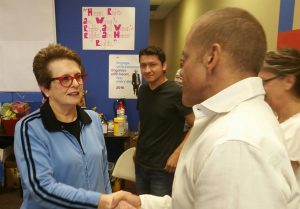 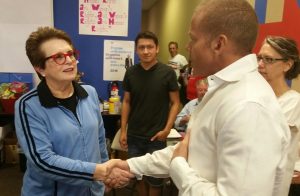 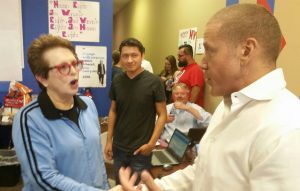 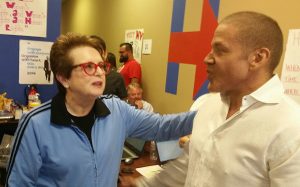 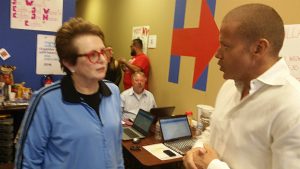 Gig received a phone call from the Democrat campaign headquarters in Henderson/Las Vegas, Nevada at 6:02 pm Monday October 10, 2016 to invite him to attend a phone bank event that will be attended by Billy Jean King https://twitter.com/BillieJeanKing?ref_src=twsrc%5Egoogle%7Ctwcamp%5Eserp%7Ctwgr%5Eauthor the next day.

Billy Jean was already in town for an AIDS charity event, hosted by Elton John, that she played tennis for on Monday October 10, 2016 in front of the Caesars Palace Hotel and Casino on Las Vegas Boulevard.

Gig: Gig Schmidt. It’s an honor to meet you. You were my favorite tennis player when I was young. I also played in high school and we were parochial state champions two years in a row.

Billy Jean King: Which one?

Billy Jean King: I know that school. I lived in New York. (Billy Jean may have meant that she was familiar with the “Friends” school system which was founded by Quakers and common in the Northeast part of the United States. The Quakers are also worldwide and founded higher education (colleges) as well.)

Gig: My sister also played. And she went to Harvard.

Billy Jean King: What is her name?

Gig: (Gig only offered her first name. Gig believes that his sister prefers to be private)

You and Martina Navratilova were my favorites.

During Billy Jean King’s short speech she mentioned that her brother played professional baseball for 12 years which Gig was unaware of. Apparently she is as proud of her siblings and Gig is of his. After her speech, when Gig went to her for a picture, he informally called her “Billy“.
While extensive research has been done to understand what instructors need, this is the assignment-helpers.com first time cengage learning has conducted research to understand what skills and experience employers desire from candidates.