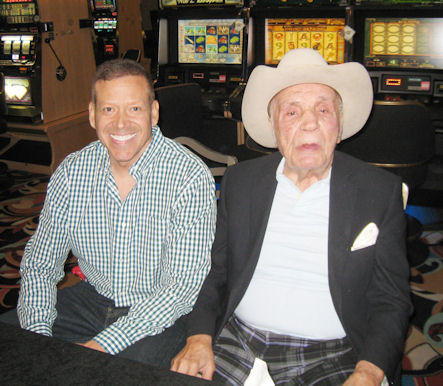 Giacobbe “Jake” LaMotta, nicknamed “The Bronx Bull” and “The Raging Bull”, http://officialjakelamotta.com/ former middleweight and lightweight boxer, 93 wins (30 by knock out), 9 losses, 4 draws, 5’7″ born July 10, 1921, world middleweight champion from June 16, 1949 – February 14, 1951, member of the Boxing Hall of Fame, well known for his 5 fights with welterweight and middleweight champion Sugar Ray Robinson (1-4) which gave Robinson the first defeat of his career and also known for his portrayal by Robert De Niro in the 1980 movie Raging Bull.
For 92 years of age Gig thought The Raging Bull looked great. When Gig told Jake that his “Uncle” was Jersey Joe Walcott, Jake replied with “he was black” to which Gig explained that he was not a blood relative but due to the close relationship Joe Walcott had with Gig’s father, Gig called him “Uncle” Joe.  Jake’s fiancé (approximate age – 50’s) told Gig something that he was not aware of.  Although Gig knew that Sugar Ray Leonard http://sugarrayleonard.com/ got his name from Sugar Ray Robinson, Jake’s fiancé told Gig that Leonard asked Robinson if he could use the name.
LVH (Las Vegas Hotel and Casino- formerly The Las Vegas Hilton) Las Vegas, Nevada, August 17, 2013
—————————————– 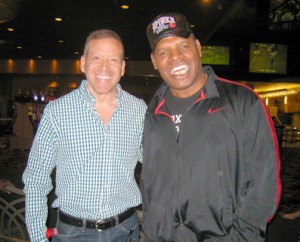 Leon Spinks, former heavyweight boxer (1977-1995) 6’1″ born July 11, 1953, 26 wins (14 by knock out), 17 losses, 3 draws, won the undisputed world heavyweight championship beating Muhammad Ali http://muhammadali.com/ on February 15, 1978 in what was considered one of the biggest upsets in boxing history. Olympic Gold medalist in the light heavyweight division at the 1976 Olympic Games in Montreal alongside his younger brother Michael Spinks, who won the gold at middleweight.
Gig told Leon that he remembered him beating Muhammad Ali for the championship, but did not tell him that Gig was rooting for Ali.
LVH (Las Vegas Hotel and Casino- formerly The Las Vegas Hilton) Las Vegas, Nevada, August 17, 2013
——————————————– 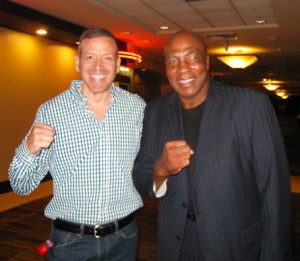 Earnie Shavers, former heavyweight boxer (1969-1995), 6′ fought at 211 lbs born August 31, 1945,  74 wins (68 by knock out), 14 losses, 1 draw, scheduled to be inducted into the Boxing Hall of Fame in 2013, In 2003 listed #10 on The Ring’s ranking of the 100 greatest punchers of all-time, fought to a unanimous loss for WBC & WBA heavyweight titles against Muhammad Ali in Sept 29, 1977,
During the early 1980’s while preparing for the feature film Rocky III, Sylvester Stallone explored the possibility of using a real heavyweight boxer in the role of James “Clubber” Lang by inviting Earnie Shavers to spar with him. The role eventually went to Mr. T. Shavers initially refused to hit Stallone with anything other than a soft jab. This frustrated Stallone, who asked Shavers, “C’mon Earnie, show me something real.” Earnie responded by punching him once near the liver, forcing an immediate retirement; Stallone later said: “that nearly killed me. I went straight to the men’s room and threw up
When Gig told Earnie that he was well known during his era as the hardest puncher Earnie told Gig that he attributes his punching power to growing up on a farm and chopping wood.
LVH (Las Vegas Hotel and Casino- formerly The Las Vegas Hilton) Las Vegas, Nevada, August 17, 2013
———————————————- 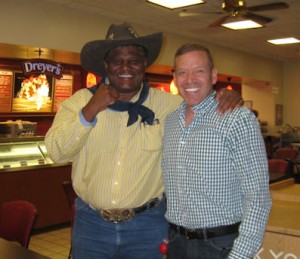 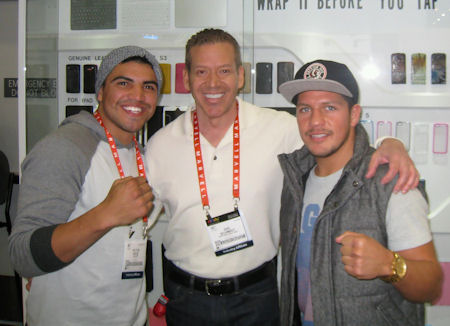 “Vicious” Victor Ortiz (left), born January 31, 1987, 5’9″, 147 lbs, 29 wins (22 by knock out), 4 losses, 2 draws, an American boxer of Mexican decent, former WBC world welterweight boxing champion who told Gig that he offered to fight Floyd Mayweather Jr. in a rematch for free, currently rated as one of the top 3 welterweight boxers in the world, in 2008 ESPN Prospect of the Year, and another professional boxer (right) 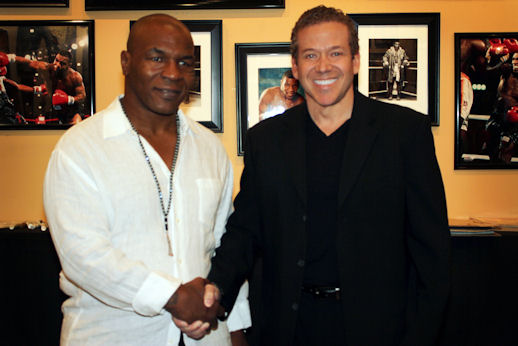 Gig was on set with Mike in December 2005 for the movie Rocky Balboa. When Gig and Mike met on January 9, 2013 Mike told Gig that he was currently reading a book about Gig’s “Uncle” Jersey Joe Walcott the former heavyweight boxing champion of the world. 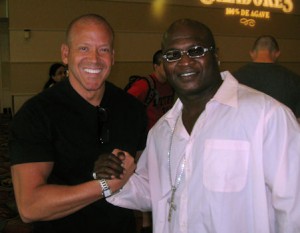 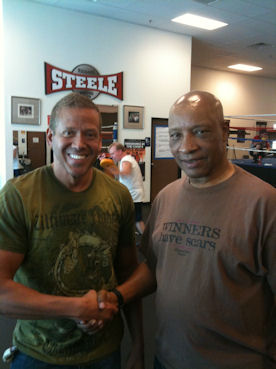 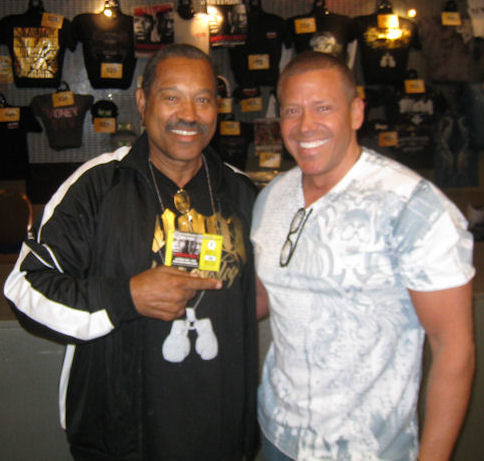 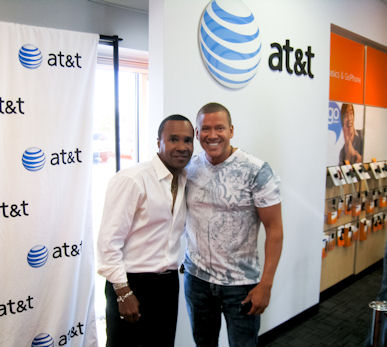 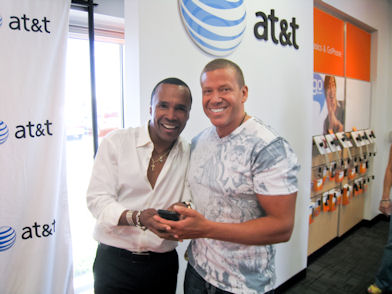 Sugar Ray Leonard http://sugarrayleonard.com/, Gig is showing Ray a picture of Ray and Gig from the 1980’s. Ray said “Look at my hair” in the picture.  Gig responded with “Look at MY hair”.

Gig’s father told him a story about Leonard fighting “Marvelous” Marvin Hagler http://www.marvelousmarvin.com/ 62 Wins (52 knockouts, 9 decisions, 1 disqualification), 3 Losses (0 knockouts, 3 decisions), 2 Draws.
Before they fought, Leonard told Gig’s father, who was at the time the Chief Inspector of the New Jersey Athletic Boxing Commission, that he would not be fighting Hagler because he was too big for him. However, Leonard, who was returning to the ring after a three-year retirement (having fought just once in the previous five years) would later fight, and win in a controversial decision. This fight was one of Leonard’s most memorable, and historic fights with one fighter moving up in weight to fight a naturally bigger opponent. The fight took place at Caesars Palace in Las Vegas on April 6, 1987. Hagler was the betting favorite and lost the WBC and The Ring Middleweight titles. The fight was The Ring magazine’s “Fight of the Year” (1987). After the loss to Leonard, Hagler retired and moved to Italy, where he became a well-known star of action films. 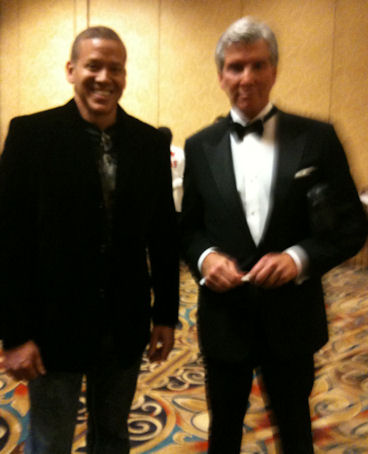 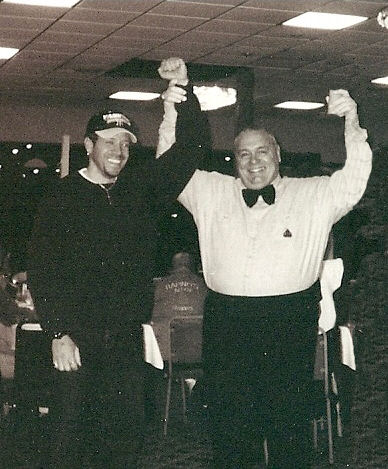 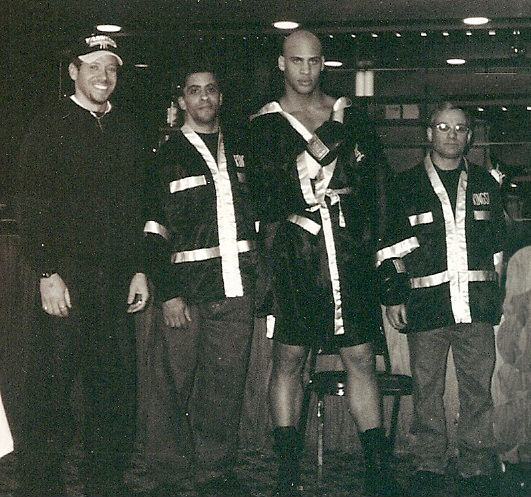 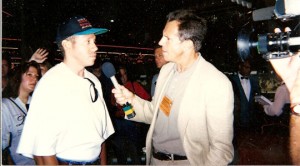 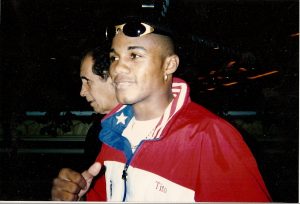 Felix Trinidad, professional champion boxer (42-3) considered to be one of the best boxers in Puerto Rico’s history. Felix fought on the same card September 7, 1996 and won by TKO against Ray Lovato bringing his boxing record to 30-0.

Photo taken by Gig after Felix exited the boxing press conference and immediately before or after Felix facetiously threw a jab at Gig, He was smiling due to what he knew he was about to do, or right after he jabbed at Gig. MGM, Las Vegas, Nevada, September 1996

Footnote: this was the weekend that Tupac Shakur was murdered in Las Vegas after the fights concluded 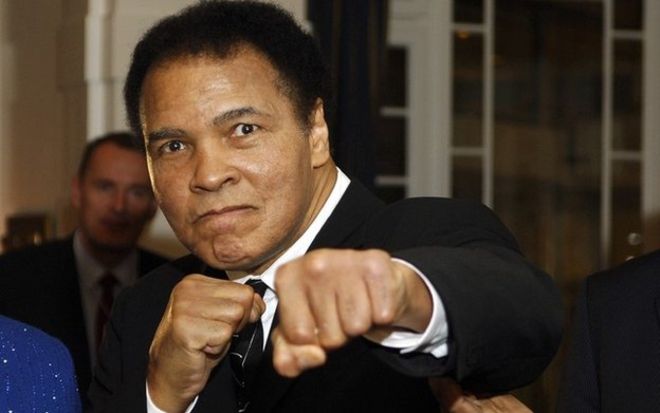 Gig had an opportunity to meet Muhammad Ali http://muhammadali.com/
but did not on March 6, 1983 at Harrah’s Marina Hotel Casino in Atlantic City, New Jersey at a fight between Carlos de Leon vs Leon Spinks. Gig’s father was the chief inspector of the New Jersey Boxing Commission and when he saw Muhammad Ali enter the building for the fight and take a seat ringside he asked Gig if he wanted to meet Muhammad and Gig said yes. Gig’s father then had an employee of his, probably one of the New Jersey boxing inspectors, go over to Muhammad and ask him to meet the chief’s son. Muhammad looked back at Gig who was standing further back from ringside and said to the employee that he would meet Gig after the fight. Gig saw a crowd of people around Muhammad after the fight and just decided not to bother him. To this day Gig regrets the decision not to just walk over to Muhammad and meet him. This was before the time of cell phone cameras and since Gig did not have a camera and did not ask for autographs, Gig did not see the benefit of them meeting at the crowded event.
Years later Muhammad would regularly attend his grandson’s high school football games at Bishop Gorman High School in Las Vegas when Gig was living in Las Vegas, but Gig thought that Muhammad was not in a condition to want to meet with people. He attended his grandson’s games in a wheel chair. Bishop Gorman High School also had Snoop Dogg’s son playing on the team, and Muhammad Ali and Snoop Dogg were seen at the football games cheering on their son and grandson, with Snoop Dogg being very exuberant. The school was known for ranking #1 in the nation in high school football and basketball.
In approximately 2006-2008, one of Gig’s real estate clients in Las Vegas was Muhammad Ali’s son in-law who was married to one of Muhammad’s twin daughters.
As a young boy Gig remembered his father driving him to Muhammad’s home in Cherry Hill, New Jersey, which is Gig’s hometown area. 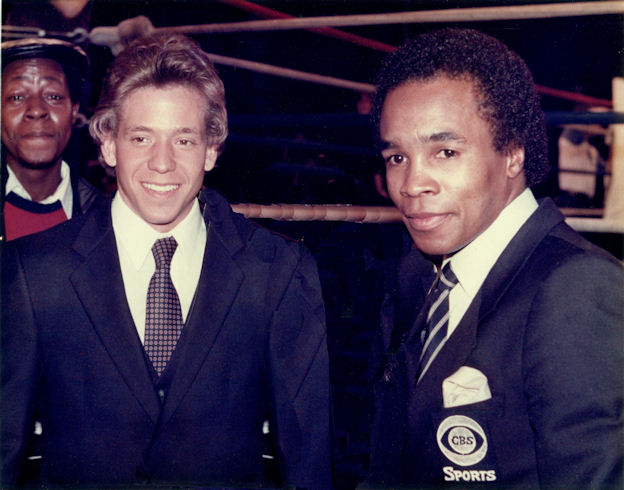 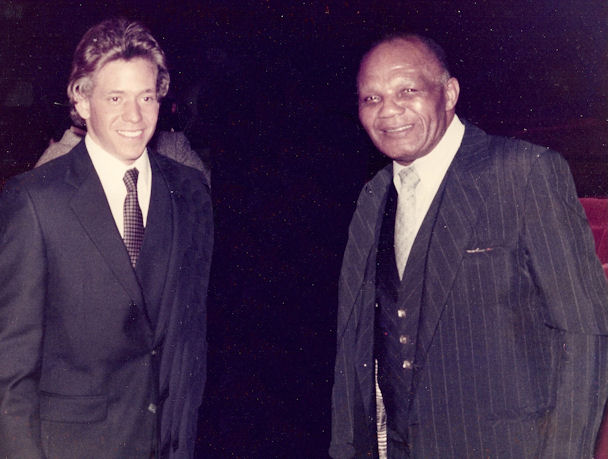 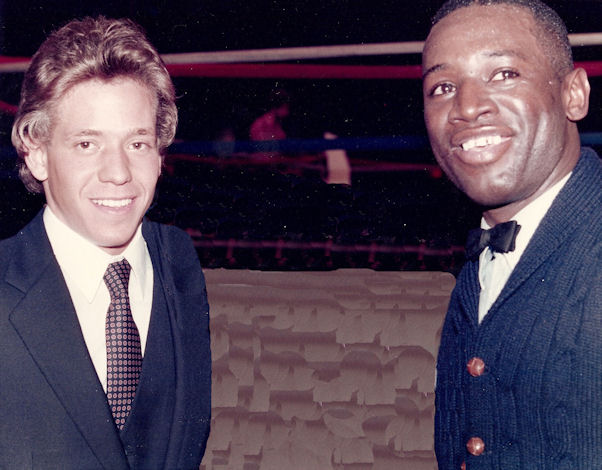 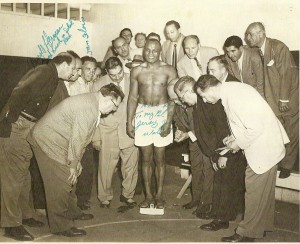 Heavyweight Champion of the World Jersey Joe Walcott,  birth name Arnold Creme, held the record for the oldest man to win the heavyweight title at the age of 37 before George Foreman. Known to Gig as Uncle Joe because of his relationship with his father. In the photo above Gig’s father is pictured at the top right over Joe’s left shoulder and Sam Florio is also pictured to the left who was Walcott’s trainer and Uncle to the future Governor of New Jersey Jim Florio (D).

“Jersey” Joe Walcott is a member of the Boxing Hall of Fame and had a record of 51 wins (32 by knockout) 18 loses and 2 draws, and is best known for his fights against Joe Louis and Rocky Marciano http://www.rockymarciano.net/home.htm.

Gig currently has the gloves worn by Jersey Joe Walcott when he won the heavyweight title which were given to Gig’s father by Walcott who later gave them to Gig.