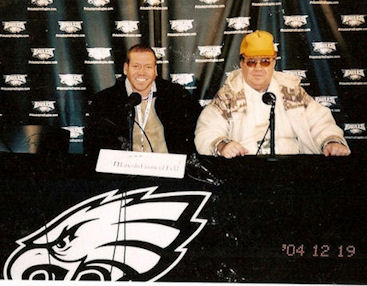 Gig had Eagles season tickets at the 45 yard line 10 rows behind the Eagles bench in 2003, which was the first year The Lincoln Financial Field opened.  But this picture was made possible by his brother who worked for representatives of the visiting Dallas Cowboys. Before the game, Gig’s brother was able to get Gig into the dining area where Gig saw Ron Jaworski http://ronjaworski.com/ a sports announcer and former Eagles quarterback, into the press area where Gig met Harry Kalas the voice of the Philadelphia Phillies and NFL Films, into the concord area where Gig saw the Eagles owner Jeffrey Lurie, onto the field where he watched the game from the Eagles sidelines and observed on field interviews after the game, and after the game into the Eagles locker room and to the press conference where Gig saw and met many of the players, coaches, staff and media personnel.